Raising a Pre-Expansion / Post-Seed Round in 2020

Raising a Pre-Expansion / Post-Seed Round in 2020

As the alphabet soup of early-stage venture capital rounds continues to evolve, here’s our view on the post-seed stage in 2020.

As a firm, we at Companyon Ventures have a sharp focus on pre-expansion / post-seed venture capital, which is probably the least-understood stage of the spectrum. These rounds are sometimes labeled as seed+ (seed plus), seed2, pre-A, seed extension, and early Series A, which only adds to the confusion among founders, VC firms, and Limited Partners (investors in VC funds). Pre-expansion / post-seed rounds are also often confused with bridge rounds and bridge notes but they are very different in almost every way.

Why Post-Seed? The Series A Gap

The gap between seed and Series A has never been greater; Series A fund sizes continue to grow larger, forcing those managers to write bigger checks at later stages. As of May 2020, the average Series A round was up to $14.4M (Source: Fundz startup companies database. Data includes Seed, Series A Funding, Series B & Subsequent Funding Rounds, compiled from SEC filings. from 01/01/20 – 05/09/20, excludes M&A related funding). The B2B-focused Series A VCs we speak with say they generally look for a minimum $4M-$5M in annual recurring revenue (ARR) before they’ll consider an investment in a company. As a result, we’re seeing more companies raise multiple seed rounds or bridge rounds before going out to raise a proper Series A.

Bridge vs. Funding Round

Before diving into fundraising dynamics, here’s how we at Companyon Ventures differentiate between a bridge round and a pre-expansion / post-seed round. Plenty of counter-examples can be found to our characterizations, but here are some common guidelines and normal ranges: 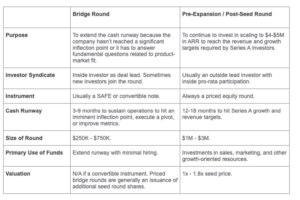 The short answer is that sometimes seed VCs do, but in our experience, it’s not common. Here are the most common reasons why seed VCs generally don’t like to lead multiple successive funding rounds and often default to small bridge notes or SAFEs when funding their own portfolio companies:

Most seed fund managers have a portfolio strategy of leading the seed round where they buy their largest piece of equity, usually 15%-30% of the company. 50%-75% of their fund is reserved for pro-rata follow-on investments in their “winners.” The model inherently assumes that the follow-on investments are made in up-rounds, led by later-stage firms whose investments are one point of validation in determining who the winners are.

At the post-seed stage, the winners aren’t entirely evident yet. So seed funds aren’t necessarily eager to deploy significant reserves in startups who are not yet breakout companies backed by expansion-stage VCs who can fund their continued growth.

There’s an inherent tension and conflict of interest when an insider investor and a CEO need to negotiate the terms of a follow-on round. This gets even more complicated when there are other significant seed investors on the cap table. On one hand, driving a hard deal for a low valuation increases the investor’s equity, but it also creates a data point that could depress downstream valuations.

On the other hand, pricing an inside round with an aggressive valuation step-up also creates a dilemma. The obvious one is that investors aren’t known for voluntarily overpaying. Secondly, investors don’t want to create a valuation that might turn away future investors or position the company for a down-round. New investors looking at a deal are often skeptical of previous valuations set by insiders due to the inherent conflicts of interests at play.

The issue of signal risk in the context of follow-on investing patterns is well known. For example, if one of your seed investors who is known to maintain pro-rata ownership is not participating in a follow-on round, then new investors will wonder why. Similarly, if a seed fund leads a post-seed round for portfolio company A, but doesn’t for portfolio company B, the fund is signaling to the investor community that they may not have as much conviction in company B. Whether it’s entirely true or not, it’s a very real dynamic and funds try to avoid injecting signal risk into any of their portfolio companies.

When an independent third party investor makes an investment in a seed fund’s portfolio company, it’s a huge mitigation of risk for the seed investors. They now have fresh capital in the portfolio company from an unbiased investor, which is comforting validation. New investors also often bring a fresh network and skillset at the table. Most seed investors we speak with much prefer to have a new fund lead a priced round rather than go it alone with a smaller inside round.

When a Bridge Makes Sense

Bridge rounds make sense when founders are not willing, ready, or able to attract outside follow-on capital. A bridge round is a great option when:

Raising a Post-Seed Round

When thinking about raising a post-seed round (or any round for that matter), we think the most important thing to do is to start building relationships with post-seed and Series A VCs well before you start fundraising. This allows you to set the “time zero” with those VCs early. Time zero is when VCs start to track your progress and get a feel for you as a founder. Assuming that most VCs will want to track your progress and get to know you over 4-6 months, the sooner you get that clock ticking, the sooner you and the VC will have a good feel for each other.

1. Don’t Undersize Your Round

Don’t undersize your round based on what you think the capacity is of your insiders. Size your round for what you need to hit a significant inflection point with plenty of buffer in the runway. For us at Companyon Ventures , these rounds are clustered between $1M and $3M which is often no-man’s land for VCs after the seed stage. Post-seed valuations are usually closer to seed valuations than Series A valuations, therefore, post-seed rounds only make sense if the subsequent Series A round is raised a valuation significantly higher than would be possible on just a bridge round. From a dilution perspective, if you’re not ready to scale, it makes sense to raise a small bridge round rather than a larger post-seed round.

Bloating the target size of your round to fit the fund economics of a larger Series A fund won’t work for a premature Series A raise. If you’re focused on fundraising (and not relationship building as recommended above), this approach with Series A investors will be a huge time-sink. You’ll have screening meetings with VCs who ultimately pass, go dark on you, or tell you to come back when you’re at $xM in ARR.

We advise seed stage companies to identify both Series A and post-seed investors within 6 months of closing their seed round. I can’t tell you how many inbound emails I get from founders who say something like, “We’re raising a post-seed round and closing in 4 weeks.” You want to be on an investor’s radar screen at least 90 days before you want to close and ideally 4-6 months prior to build mutual trust and a meaningful relationship.

3. Be Prepared for a Rigorous Process

4. Know Your Metrics Inside and Out

Have your metrics nailed. If you’re raising a post-seed round, you’re raising money to scale. For investors to fund growth, you’d better have a solid 12+ months of pipeline metrics, financial metrics, and a track record of delivering on your plans. I’d estimate that two-thirds of our due diligence effort on our most recent deals were related to dissecting operational metrics and customer interviews.

5. Get Pro-Rata Commitments From Inside Investors

Many post-seed investors look for pro-rata inside investor participation. Prior to speaking with new investors, be sure to get clear commitments from your existing investors about how much they plan on investing in the round. Ambiguity on this topic is a very poor signal to new investors. A good target is to have 30-40% of your round committed by existing investors. At Companyon Ventures , this is a major requirement for our participation. If insiders aren’t supporting your follow-on rounds, it’s a signal to us that you’re not one of their top-performing portfolio companies, which means you probably won’t be one of ours either.

6. Broaden Your VC Search Beyond Your Local Market

Unlike many seed investors who tend to focus on local companies, post-seed funds tend to invest in a wider geographic area. At Companyon, we invest all across North America and occasionally in Europe. When searching outside of your local market, you’ll also likely be approaching VCs outside of your professional network. This highlights the importance of my prior point about starting to build relationships early. An investor on the other side of the country isn’t going to meet you on a zoom meeting, then perform diligence, negotiate terms, and close a post-seed round 60 days later.

If you’re a B2B SaaS startup approaching the $1M ARR threshold thinking of raising a post-seed / pre-Series A round in the next 12 months and want to learn more about us, please reach out. We’d love to connect with you. 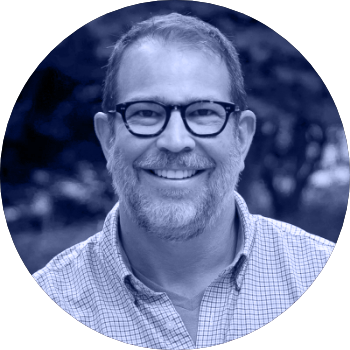 Tom Lazay is a General Partner at Companyon Ventures, funding B2B software startups into their expansion-stage by injecting decades of startup and VC experience through operational hands-on investing. The Boston-based firm leads post-seed, pre-expansion rounds in capital-efficient startups across North America that are ready to scale. Companyon’s capital and expertise help scale portfolio companies into a supersized Series A or non-dilutive growth. The firm invests in startups with $1-3M in recurring revenue aiming to scale by 2-3x in the first year with help from its growth-ops Platform Team that offers experience, tools, and playbooks used in top-performing software startups.